I was looking for images that gave me an inspirational message to write about, and when I stumbled upon this one, I knew that it was perfect. 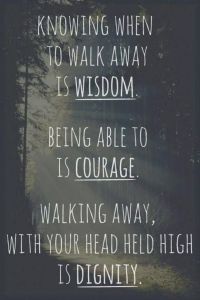 Recently, I have been faced with the challenge of walking away from someone who I decided really wasn’t the best influence on my life. We’ll go ahead and call that person “Lion.” I’ve had it in the back of my mind that I needed to do this for more than a month now and I finally built up the courage to officially do it today. Its not easy to let go of someone who used to mean the world to you, but I already feel better knowing that Lion is no longer something else I have to worry about. You see, Lion and I used to be close. Two peas in a pod, two marshmallows on a stick. We believed in the fantasy word “forever” and believe that no matter what happened, we would make it work. We chose to gave ourselves a title, not knowing that by doing so we were doomed to end. You see, its “nothing” that lasts forever, not friends.

I walked away for myself. I walked away because I believed that I didn’t deserve to live in constant pain. I was better than that. I wasn’t born to be torn down by other people’s words and actions. I walked away because no matter how badly it hurt, I knew that it needed to be done. I’d lost myself, and I knew more than anyone that I needed to find myself again. I wasn’t as happy and chipper as I have always been and it became increasingly harder to put on a brave face and a smile.

I realized that Lion had changed, but no matter how hard I tried, or how long I waited, Lion was never going to be the person he was. Its not necessarily a good thing or a bad thing, its just the way life flows. In all honesty, I never thought I’d write this post, but life happens. Sometimes the people that we love the most are the worst for us. We get so lost in an emotion that we thought was love that we don’t realize that Lion is actually limiting our capacity to love and love deeply.

So, my advice to all of you is to not be afraid to walk away. Don’t hesitate to get rid of the “Lions” in life that just hold you down. You are more important that that. You’ve got too much on the line. But, do me a solid. Walk away with pride. Walk away because you want to make your life better. Because according to the above quote, and according to me, walking away with your head held high… that right there is dignity.