Now, I am not really one of those girls who like getting all dressed up and doing my hair. If I had it my way, I would have spent prom in some exercise pants and a baggy t-shirt. Personally, I find the whole prom thing to be a bit exaggerated and stressful. Girls spend so much time and money finding a dress, and then they have to get someone to do their hair, makeup, and pictures. Then there is the stress of trying to find a date. I really don’t understand why some girls find it so important to have a date for prom. I mean, I flew solo and I have a marvelous time! I think all you really need on the night of prom is a good group of people who don’t care how ridiculous they look while dancing.

Okay, enough with my ranting about prom. I went, and I really enjoyed it, so I shouldn’t be too hard on the materialistic side of the whole tradition. All in all, it was a great night. My day-before-purchase-dress was a hit and I think it looked pretty snazzy. (Yes, I had to get my dress a day before the prom because the one that I had ordered online did not come. That is a story within itself.) I took pictures with a big group of my friends and got to be the secondary official photographer for the couples (one of the moms was all over the place with her iPad getting snapshots of the whole thing) and since I didn’t have a date, it all worked out well. 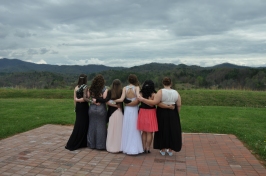 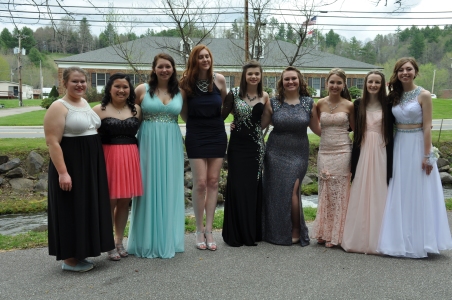 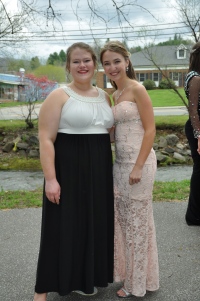 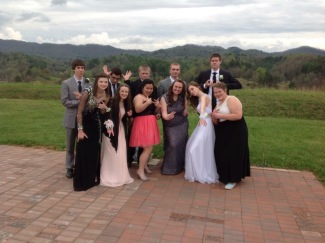 We are a force to be reckoned with! 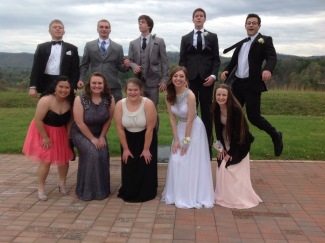 Jump! for my loove! 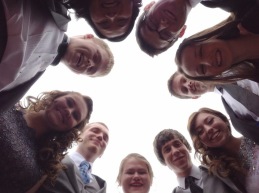 Oh my gosh, Becky… look at her butt!

The whole gang (minus a few)

The gang that had dates…. 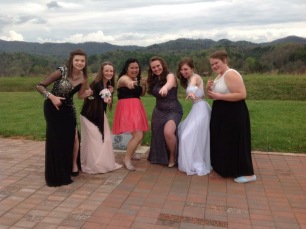 Don’t mess with us. 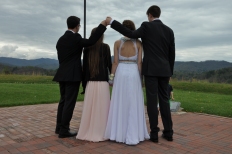 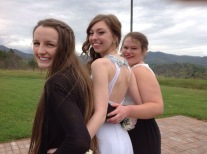 After we took endless photos, (the photo count was up to about 500 by the time we were done) we all headed over to Johnson City to eat at Outback. We went in two different groups because a few people needed to touchup their makeup and stuff. So, the first group went and made sure that we made our reservation, and then the second group left about 30 minutes later. Now you shall hear my rant about my “handy dandy” GPS on my phone which got me lost once, and then didn’t stress which turn I had to take until it was three seconds too late. All in all, my GPS made me 30 minutes late, and the last one to arrive at the restaurant. Needless to say, I didn’t lead on the way back to prom. Anyway, dinner was fun (look, my favorite word again!) and I got to laugh a lot (thanks Mario, and Kaela!).

After dinner, we headed back to Spruce Pine to go dance the night away! Prom is always super awkward when you first walk in. When we got there, there was practically no one dancing, and the DJ was playing country-bumpkin music. Now, I’m all for country music when you live in the southern mountains, but just because some people like to listen to it on their ride home from school, doesn’t mean that there is anyway for us to dance to it. But, soon enough, they announced for the prom court to make their way to the dance floor, and finally they announced Prom King and Queen.

After that announcement, the music moved away from country and closer to dancing music. One of my friends brought an out of school guest, and he had all of the moves. He was definitely a better dancer than any of the boys from my school, and he was pretty funny too when they played some dirty songs. About halfway through prom, we got one of our teachers out onto the dance floor and did his famous “one step” in a circle around him. I’m pretty sure that no one had any clue of what we were doing, but we all knew. 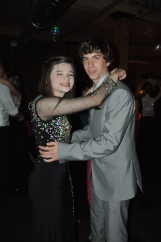 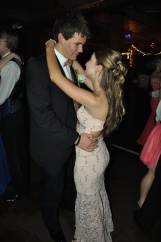 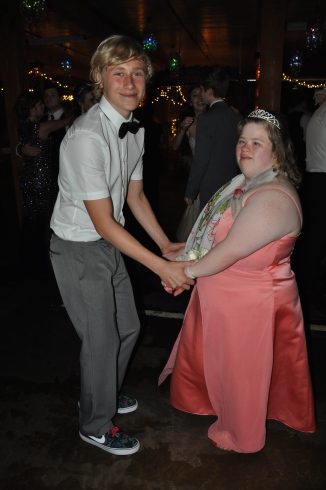 #Selfless. Zach was amazing and took this sweet girl to prom.

After a night of dancing (we were the last people to leave) we drove up to camp and played paintball. There were about 11 of us, and while I was super excited about playing paintball, it didn’t exactly turn out how I had expected it. I guess I didn’t really think of how dark it was actually going to be. I had glow sticks for each person, but when your playing on as big of a field as we played on, they don’t help much. It was pretty much just shooting into the general area of a tiny glow stick and listening for groans of a person being hit. About halfway through, I ran out of ammo along with a few other people, so we paused the game to get more bullets. While in the neutral zone, we decided to shoot the two people still left in the game. We all put a bunch of bullets in our guns and shot at those two little glow sticks that we saw in the woods. The sad part is that the 9 of us that were shooting only hit the last two about eight times. I know, its sad.

When we all got a bit tired of shooting bullets into the darkness of the night, we decided to call it a night and sit by the campfire. We had s’mores and soda (nutritious, I know) and talked about all sorts of things until about 4:30 in the morning. By that time, I had smoke in my eyes, mouth, and hair, and I could barely sit up in my chair without falling asleep. So, I said goodnight to some of my friends and headed to bed. They went for the all-nighter and woke me up at about 7:30 to tell me that they were leaving. Sunday was a complete day of rest for me though. I slept pretty much all day, and every time I got up, I basically fell back into the bed because I was so sore (wow, dancing for four hours straight really hurts). All in all, I had an amazing time. I hope to hang out with the whole group again soon sometime, just around the fire and stuff. You really learn a lot about people in the wee hours of the morning!

Well, thanks for reading this insanely long post. I had a lot of fun at prom, despite the unworthy stress and consumerism of the whole day. I will always have the memories of this night in my mind.