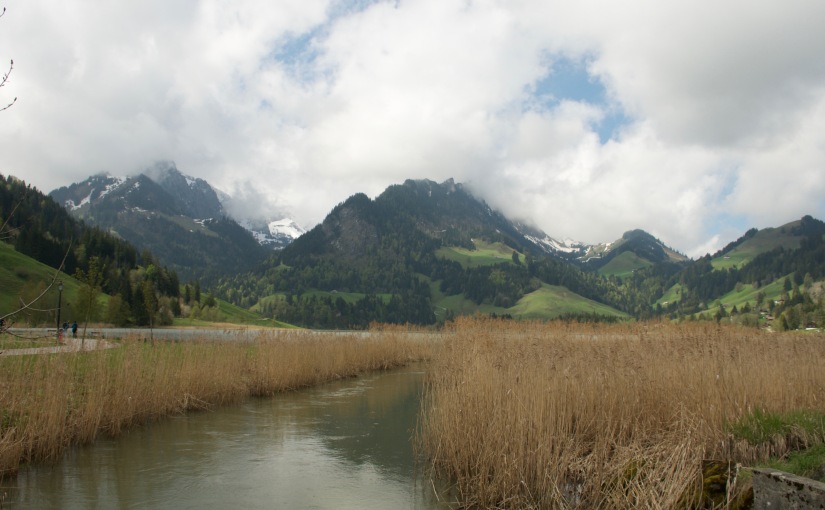 We woke up early the next day and had a special Sunday breakfast of fresh croissants. Then we got in the car and drove to the Schwarzsee (Black Lake) so we could see the pre-alps. I mean, you cant go to Switzerland without at least getting a glimpse of the Alps. We walked around the lake, and I went crazy with the camera. I wish I could have spent a whole day there just exploring and what not. Valérie told us more stories about Switzerland while we were walking around. We got to see traditional Swiss cows and feed the babies and pet them. There we also people paragliding around the lake which was pretty cool to see. After we had made it all the way around the lake, we went on a driven tour around the Fribourg, looking for good views of the city. We parked illegally to get some photos of the whole town, then pulled off the highway to get a picture of a picturesque bridge over the Saane river that runs through Fribourg. Then we headed back to Valérie’s house to pick up our stuff so that we could catch the train back to Basel. Valérie walked us down to the station and we said our goodbyes. It was really nice to see Valérie again and she was such an amazing tour guide.

We took the train into Bern and then transferred to a train to Basel, where Chris Guillini (a former camp mom and tutor) met us at the station. She took on the scenic route back to her house which consisted of lots of winding roads. We got to see the Goetheanum and all the weird shaped houses of Dornach which is the center of the anthroposophical movement. Then we dropped off our stuff at the house and met Lorenzo and their dog Pandora (a little pit bull mix, such a sweet dog). Lorenzo (Chris’s husband) took us to the bottom of the mountain and Marguerite, Chris and I hiked with Pandora in the Jurassic alps. The scenery reminded me a lot of the mountains here in North Carolina. Since it had been raining a lot, we had a minor detour since the trail Chris normally took had a pretty fast moving river running through it. We managed to find our way around and when we got to the top of the mountain, Lorenzo met us and picked us up. We then went to a small brewery where Chris and Lorenzo knew the owners and everyone had a few beers and snacked on soft pretzels. Since Marguerite and I hadn’t eaten much that day Marguerite got pretty tipsy pretty quickly.  Pandora started getting restless so we went back to the house. Since everyone except I had been drinking, they let me drive us all back to the house. Pretty cool to now be able to say that I have driven in Switzerland (even if it was only for about 5 minutes).

When we got back, Chris and I prepared fondue chinoise which is one of our favorite family meals that Chris introduced to us. Basically its like fondue with a hot broth and you cook your vegetables and meat in the broth. It is so delicious. After dinner we watched Legally Blonde (Lorenzo’s choice) and Marguerite and I both fell asleep during the movie. We did stay awake long enough to hear both Chris and Lorenzo singing along to the songs, it was fun. After the movie was over, Marguerite and I went straight to bed. I think it was pretty obvious that we were both exhausted.

The first glimpse of the alpss

At the top of Fribourg

A train bridge (stopped on the side of the highway)

On our hiking trail in Basel, we found these drawings that the soldiers made during World War II while they weren’t fighting.

The view from the end of our Basel hike.