Its no secret that I’ve been a traveler since I knew what the word meant. I’ve spent quite a few summers abroad, exploring the world less known to me. When the opportunity to study abroad first became known to me my mind went wild with possibilities. Would I stick with something comfortable like London, go as far as I could to Australia, or place myself in an entirely foreign environment like South America or Africa? While Australia really tickled my fancy for a while, a program offered by my university caught my attention. You see, NC State has a foreign campus in the cultural hotspot of Prague, Czech Republic. I had never been to Eastern Europe and the comfort of having a piece of my family just a short plane journey away really appealed to me. I submitted my application and within a few months and a fair deal of planning, visas, and stress, I was on a plane to the Czech Republic.

Monday (Jan 8th) started the first day of orientation for NC State Prague. We hopped on a tram and took it to Wenceslas Square (Václavské náměstí). It turns out the school is located directly in the center of Prague, just a few feet off of the Old Town Square. After what seemed like endless meetings about expectations, rules, and academics, a few awkward ice-breakers, and a quick history lesson we were free to explore the city. It gets dark at around 4:30 here, so most of our exploring was done in the dark, but this city looks beautiful lit up at night. We wandered around the Old Town Square, made our way to the Charles Bridge, and managed to get back to our accommodations without getting lost or asking for directions.

The next day we were given a guided tour around the city. Our tour guide was American and had moved here after her studies, and knew a heck of a lot about the city. It was interesting to learn about the history of the city through the world wars and the communist regime in the Czech Republic. Since the city was occupied by the Germans before WWII began, much of the city was left unharmed in the war. A good majority of Prague is centuries older than the United States and its crazy to think of all the life that has been lived on the streets of Prague.

After a full day of touring the city, my friends and I wandered into a so-called speakeasy in the center of Prague. It was recommended by our tour guide as a good spot for a beer away from the typical tourist destinations. It was located within an apartment, on the very top floor and was cool and quirky, the way you’d expect a speakeasy to be. After a beer and some good conversation, we headed back to our dorms and called it a night.

On Wednesday, we left the city for our first out-of-city excursion. We headed north in the Czech Republic for a ski trip in the mountains. On our way we stopped at the Sychrov Castle for a tour. The castle was owned and occupied by the Rohan family from the early 19th century, when they reconstructed the castle that previously stood here, until the WWII when it was nationalized. It was absolutely beautiful, but oh so cold within the castle walls. I guess central heating wasn’t popular in the 19th century. 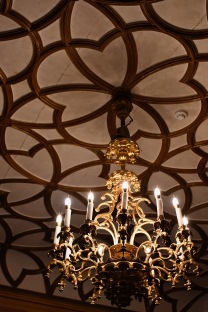 After our tour we headed to Černý Důl, a small ski town in the northern part of the Czech Republic. Once we had checked into our hotel, we went to the ski shop to rent our skis. Later we had dinner, and the whole group met up for a night of games. The restaurant/pub had 9-pin, pool, and table football. We played these games late into the evening, then went to bed, getting well rested for a day of skiing.

The next morning, we woke up to a fresh dusting of snow and a winter wonderland in Černý Důl. We put all of our gear on and walked to the ski lift only a short walk away. Unfortunately I sliced a good chunk of my finger on the bottom of my skis, but a quick rinse and bandaid later, I was ready to hit the slopes. The view from the top of the ski lift was worth the terror of making it down the slope. I am no rookie skier, but I was not prepared for the steepness of the hill. I managed to make it down the hill a few times with only one fall before deciding to call it a day. I wanted to stop while I was ahead and before I took a huge tumble or exhausted every muscle in my body. But my goodness, it was a beautiful ride. We ended the day with a traditional Czech meal of meat and potatoes, and my friends and I all pushed a few beds together and watched The Shining. 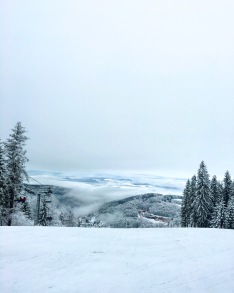 The next morning we hopped back on the bus and made our way back to Prague. On the way we stopped at a Czech brewery for a tour and tasting. The Svijany Brewery is one of the oldest breweries in the Czech Republic, dating back to 1564. There they showed us the process of brewing their beer and even let us try their malt and hops (which I would not recommend). I’m not a huge fan of beer, however I did try the beer because why not, but all I could taste was hops from trying a hops pellet earlier in the tour (that taste really lingers). After our tour we made our way back to Prague, sleeping most of the way home. I decided to call it an early night to recharge my battery.

On Saturday, my friends and went on a city adventure. We walked almost all day and saw quite a bit of the city. We took the metro into town and headed straight for the Charles Bridge. It was a bit more crowded than earlier in the week, but the views were still gorgeous. We made our way into Malá Strana which is the smaller part of Prague across the bridge. While the English translation for Malá Strana is Lesser Town (for its size), it certainly is not lesser in beauty. 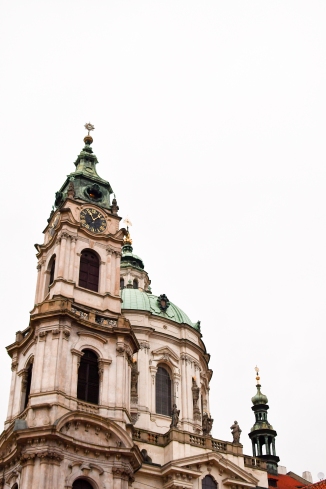 At the top of the hill sits the Prague Castle, surrounded by palaces and ecclesiastical buildings. Below sits a wide variety of shops, churches, and gardens. We wandered through the residential streets for a bit before deciding to make the trek up to the castle. The views from the top were magical, and you could see the entirety of Prague. We didn’t manage to make our way into the castle, agreeing that it would be more fun when the crowds were fewer and the weather was warmer.

We made our way back down the hill and wandered among the tourist-y streets until dark. We crossed back over the Charles Bridge back into Old Town and found our way back to Old Town Square. We had some time to kill until dinner so we headed over to the Palladium shopping mall to escape the cold. There I found some post cards to send to my family and spent quite a while roaming a Czech bookstore, looking at pretty books, unable to understand anything. We braved the cold once again to head to dinner. We took the metro to Praha 3 where we found a underground Vietnamese restaurant away from the hustle and bustle of the center.

My first week in Prague has been chock full of exploring and culture. I’m still getting used to living in a city abroad, and I’m starting to plan my first ventures out of the Czech Republic. So far, I’m loving the adventure, not crazy about the traditional cuisine, and forming a strong group of friends. I still have a week until classes start, but my school has prepared a few activities for us to get to know the city like a local.

I’m looking forward to learning to live in this city and exploring all there is to see. And I hope you come on this adventure with me!

One thought on “A Semester in Prague: Week 1”