On day 13 of our trip we woke up bright and early at the B&B and had a tasty breakfast made by our lovely hosts. We packed up all of our stuff and drove to the other side of the bay where we got out and looked at an old church in Abbeyside and took pictures of the boats out in the bay. Then we hopped back into the car and drove to Blarney where we went to the Blarney Castle. Unfortunately, Ireland’s famous soggy weather joined us at the Blarney Castle and it was the first day of our trip that the sunshine decided not to follow us. But we hadn’t come all this was to miss out on kissing the Blarney Stone. According to legend, kissing the stone endows the kisser with the gift of the gab. We walked to the castle, climbed up a set of insanely small and steep spiral stairs and made it to the top rim of the castle. From the top you could see all of the grounds and even on a cloudy day, it was quite beautiful.

After waiting for our turn, we each one by one layer down on the floor of the castle wall, leaded our head back way farther than I thought we would have to, and kissed the bottom of a stone that has been kissed by millions of people (including Kaitlyn Bristowe and Jared Haibon of the Bachelorette). It was definitely an experience but Marguerite was pretty grossed out by how unsanitary it was. Once we had all kissed the stone, we made our way back down another set of insanely small and steep stairs and walked around in the gardens. We also saw the poison garden which was filled with poisonous plants from all around the world. The gardens were beautiful and filled with azaleas of every color, that were a beautiful contrast against the gray and foggy sky.

When all of the pictures had been taken, we got back in the car and started heading towards the O’Sullivan’s in Bantry (a former counselor, Donagh’s parents). Boy was that a journey. Before we started too much of our journey, we made a quick stop for coffee and some carrot cake as well as getting a few gifts for the O’Sullivans. When we got back onto the road we managed to find our way into quite a traffic jam. Not in the sense of like rush hour in a large city, but more in the sense of a truck getting stuck and blocking the narrow Irish roads. We were first stuck in traffic for about 30 minutes and then an older lady told us to follow her where she took us on a back road. After driving on that road for a few minutes, we figured out that the back road was also blocked because a HUGE truck was stuck there. So we turned back around, asked the older lady for another way to try and followed that to try to get out of all the traffic. After driving on a few way-too-narrow back roads, we finally managed to find our way into Bantry.

John O’Sullivan met us in downtown Bantry and lead us to their house where we met Dierdre (Donagh’s sister) and Kate (the mother) who had made us a lovely Irish dinner. Then we had rhubarb cobbler and tiramisu for dessert which were both delicious. After being full to the brim, we went into their living room and chatted for a while after deciding that it was too wet outside to go for a walk. When we all started practically falling asleep on the couches, we went upstairs to our rooms. Deirdre very kindly let us sleep in her room, while Amy slept in the guest room. Despite the long car adventure and the gray skies it was a pretty exciting day for us all. 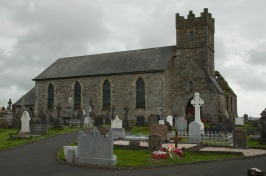 The church across the bay in Abbeyside

A quick drive through Cobh, the Titanic’s last port of call before the disaster. 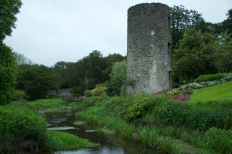 At the top of the castle.

The private house on the Blarney Castle grounds was like a mini castle in itself.

Marguerite and I play Bachelorette at the Blarney Castle. “Will you accept this rose?”