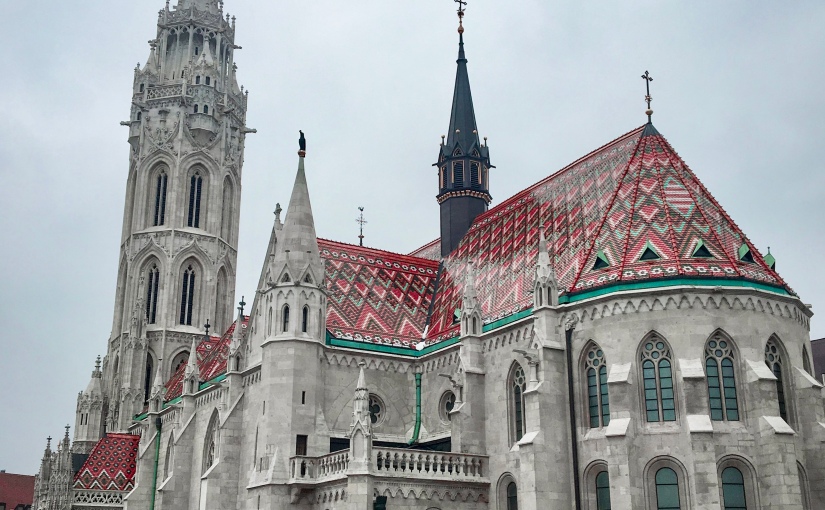 This week has felt like quite a turn around for Prague. Almost the entire week was filled with blue skies (although still quite cold) and the color looked good on the city. Its like Prague really comes to life with a bit of sunshine and bright blue skies, and I think I do too.

I managed to get out and enjoy the city solo on Tuesday before my cooking class, and wow, it put me in such a great mood. There were so many people out enjoying the weather, and so many street performers just doing there thing. Bubbles seem to be relatively popular here in Prague, so it was only natural to find a man making giant soap bubbles in the middle of the Old Town Square. I stood and admired the bubbles for a bit, then headed to my cooking class.

This week we made a bunch of bread. We started with a sourdough loaf which our teacher had prepared beforehand to let it rise for a bit, and then moved onto a yeast dough that we shaped into animals and braids. We also made a delicious mushroom soup topped with a poached egg and some dill. I was a bit unsure about the soup since I’m not the biggest fan of mushrooms or eggs, but it was absolutely delectable and the yolk from the egg added a richness to the soup. For dessert we made a cinnamon twist loaf that again was delicious. 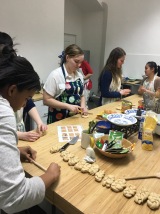 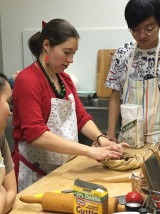 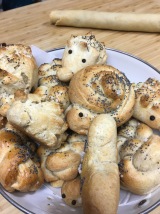 The rest of the week went on as usual, until Friday when at 11:30 p.m. Marcie, Jack and I hopped on a bus to Budapest, Hungary. It was a roughly 7 hour bus ride and we drove through the night and arrived early that morning. It was too early to check into our AirBnB, so we dropped off our luggage in a closet they had for us and then went exploring for a bite to eat at STIKA which was cosy and delicious. We still had a few hours to kill so we wandered for a bit and ended up at the Central Market Hall to escape the cold and experience a bit of the local culture. We passed the Budapest Eye at the Erzsébet Square, and saw a bunch of incredible murals hidden on the sides of buildings. 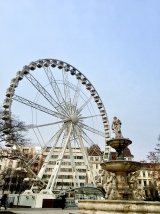 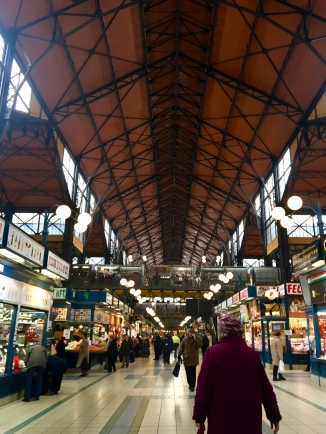 After about an hour wandering around the market, we made our the House of Terror Museum which serves as a memorial to the victims of two terror regimes in Hungary. The museum presented a picture of what life was like for Hungarians in those times both under the power of fascism and communism, and the nations relationship with Nazi Germany and the Soviet Union. 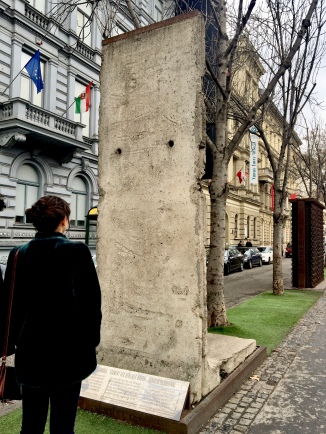 By this time we were exhausted from a rough night of sleep on the bus and walking around in the cold, so we went to check into our AirBnB. We all passed out as soon as we got there, but were ready and recharged to take on the evening. Jack found a very hip restaurant right near our AirBnB, so we went there for dinner and finished the night on the Budapest Eye.

We planned Saturday to be our main touring day, so we planned all the places we wanted to see and set out to check them off our list. Our AirBnB was conveniently located right next to the Basilica, so I snapped a quick photo on our way out the door and was ready to set off! Marcie had visited Budapest as a kid and had some adorable photos around the city, so with Jack’s detective work we found all the locations and recreated the photos. After we checked that off of our list we headed across the Széchenyi Chain Bridge to see the Parliament building. 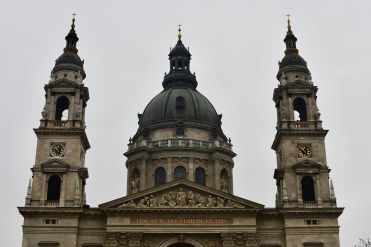 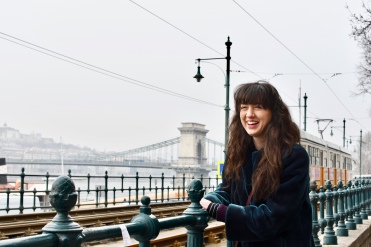 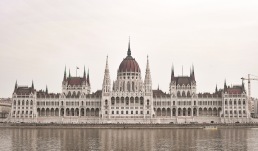 The Parliament Building was so grand and ornate and I probably could have stood there for an hour and still not have been satisfied with admiration. Unfortunately, it was freezing so we took a few pictures and set off again. We managed to find our way to a subway station and after some time and planning, we figured out how to get to the Fisherman’s Bastion. The Fisherman’s Bastion was probably my favorite sight of the entire trip. It was so gorgeous with its ornate white facade paired with the colorful tiled roof. After having lunch on top of the hill near the Fisherman’s Bastion we made our way back down, stopping quickly at the Buda Castle. 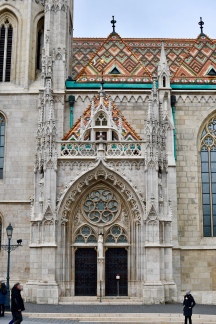 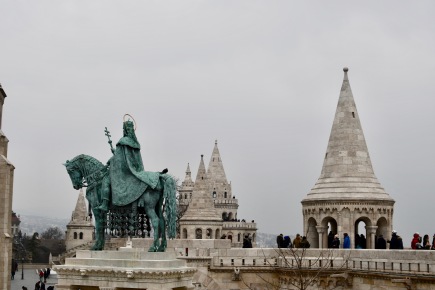 We headed back towards the center of the city and walked to the The Dohány Street Synagogue. Sadly, it was closed when we got there, but we were still able to walk around the outside and see the Holocaust Memorial known as the Tree of Life or the Emmanuel Tree. We called the night relatively early and just watched movies in our AirBnB until the next morning.

We woke up the next morning to a layer of thick, heavy snow. We decided to make the most of our next few hours in Budapest and went to Memento Park which is a collection of gigantic monuments from the communist dictatorship in Hungary. These statues were removed from the streets of Budapest and placed in a park outside of the city where they stand today. 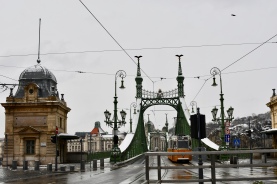 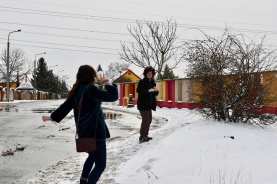 Budapest was absolutely wonderful and quickly became one of my favorite European cities despite it being cold and grey for the majority of our visit. As we were getting on the tram to get to our bus the beautiful city waved farewell with a gorgeous blue sky. 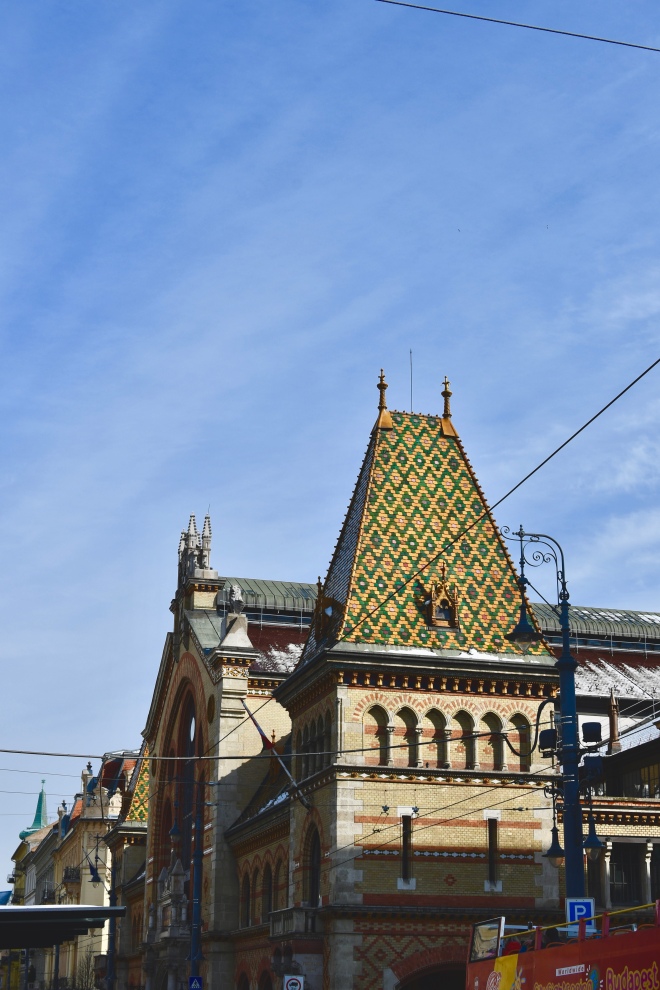 These weeks are going by so quickly, and its only a short time now until I get to see my parents and show them around Prague. I’m so glad I have them behind me encouraging me to take the most of this incredible opportunity, and I love them so much more for it. Thanks Mom and Dad for affording me this life-changing experience.

I’m updating this blog weekly (or trying to at least), but you can follow my day-to-day adventures on Instagram: @aninavdv