Whoops, these posts are getting later and later in the week. Time is flying by here in Prague though! I can’t believe I’ve already been here for a month! I’ve never been outside of the US for this long and while I’m enjoying my time immensely, all the comforts of home are starting to creep up on me. Classes keep me somewhat busy and my weekend adventures definitely keep my traveling spirit alive.

Tuesdays are always my longest, yet most enjoyable day of the week for one simple reason — my culinary class. I’m a huge fan of cooking and signing up for a Czech culinary class might have been the best decision I have made thus far on my trip. Each week we make a three course dinner for each other, consisting of soup, an entree, and the most delicious desserts. I’m starting to think that I should dedicate an entire post each week to what we make in this class, sharing each recipe so that I can remember them in the future as well. This week we made roasted onion soup, sausage and sauerkraut strudel, and a classic apple strudel. Its so interesting to learn new techniques and to learn our teacher’s family recipes.

The rest of the week flew by and before I new it I was packing my bags and boarding a plane to Eindhoven. It was so refreshing to know that I was flying to a familiar place where they spoke a (somewhat) familiar language and seeing some of my favorite people— my Dutch family. I took four friends to the Netherlands with me and was well and prepared to be their official Dutch tour guide!

We arrived late at night and my uncle, Luc and cousin, Daan came to the airport to pick us up. A few minutes later we were “home” and settled. We had a few drinks in the blokhut, played some games, and chatted until the wee hours of the morning. It was a fun way for my cousin to meet my friends and they got a bit of a taste of my family as well.

The next morning my friends slept in while I made my way to Bergeijk to pick up my Dutch passport!! After the stressful fiasco that was trying to get a visa for the Czech Republic, I was so glad to officially be a part of the EU. Holding that passport was like a giant weight lifted off of my shoulders.

The rest of the day was spent playing cards, exploring Boxtel and the Friday morning market, and visiting Oma. It was fun to show my friends around a town that I am so familiar with and I gained a new appreciation for Boxtel and the childhood days I spent there. I consider my Dutch heritage to be a huge part of who I am and it was fun to get to share that with my friends. We ended the evening with the typical Friday meal of frietjes and kroketten and a long night of endless card games. 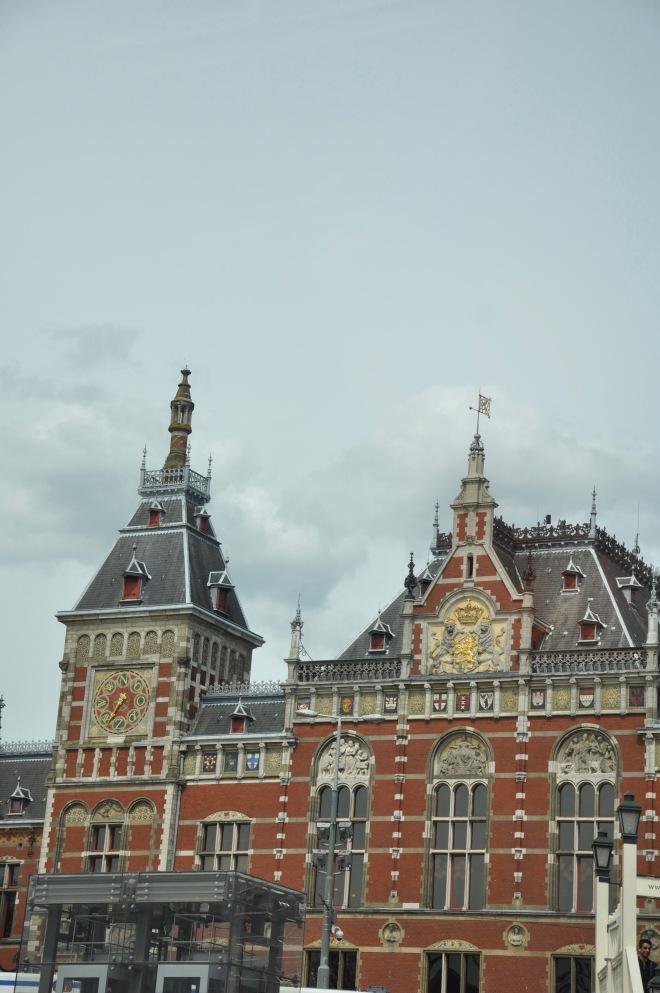 The next morning my friends and I woke up early to catch the train to Amsterdam. We only had a few hours in the city, so we did a bit of strategizing to get the most out of our short visit. We walked quickly through the Red Light District, stumbled upon Dam square, strolled along the canals, barely dodged quite a few bikers, and finally ended up at the Rijks Museum. The Rijks Museum is probably one of the most beautiful museums I’ve ever been to, and its not as overwhelming as other art museums such as the Met.

We spent an hour or so wandering around and looking at some incredible artwork. I had been there before, but still managed to see artwork that I hadn’t seen during prior visits. After the Rijks Museum we spent some time being typical American tourists and took photos at the I amsterdam letters outside of the Rijks museum.

After a quick lunch, we split up into two groups — two of us headed to the Van Gogh museum, and the other three to walk the streets of Amsterdam. I was a bit museumed-out so I guided the other two to Vondelpark, and then just through the streets to see the typical Amsterdam houses. In the two hours that we were walking around we got sunshine, clouds, and even a bit of rain. 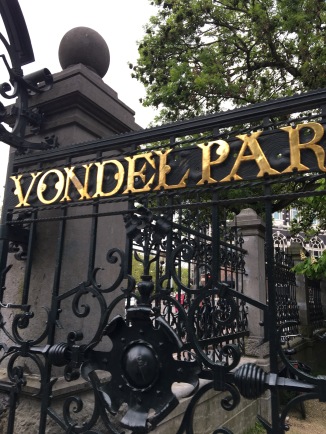 We all met back up for dinner and made our way back to the train station for an early night back to Boxtel. We spent the rest of the night playing games, laughing lots, and building card towers. 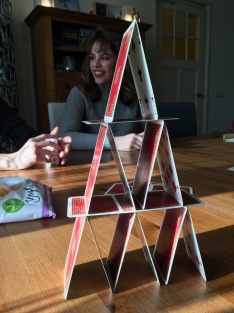 The next morning I woke up early to have breakfast with Oma, and spend a bit of time with her before we went back to Prague. We headed back to Prague around noon, and spent the rest of the day getting ready for the week ahead.

It was so nice to see my family again, and to feel a bit of that comfort of home. I feel incredibly lucky to have them so close and its comforting to know that they’re only a short plane journey away.

I’m still loving this study abroad experience, and its giving me a serious case of the travel bug. I am making all sorts of plans to travel within Europe and I’m even thinking about some short trips I might take when I get back to the US. Next weekend I’m taking a bit of a break from the weekend trips and just having a chill weekend in Prague which should be nice a refreshing. I’ve seen quite a bit of Prague already and I’m getting relatively comfortable with the city, but there’s so much more to explore. Catch you next week for another update, and possibly another post dedicated entirely to my cooking class! 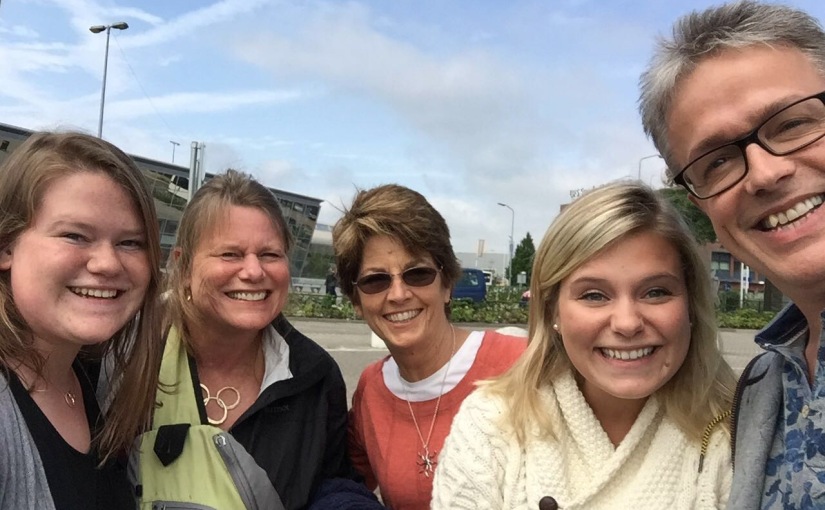 I’m going to condense some of the days spent in Holland because a majority of our time was spent relaxing with the family.

Our week long trip in Ireland had come to an end. We woke up relatively early to make it to the airport on time. Once all checked in and through security we stopped for breakfast and coffee. Then we boarded the plane and made our way to Eindhoven. Our Uncle Luc met us there and he drove Mom and Amy to the central station so they could go into Amsterdam to see a coffeeshop. Marguerite and I went back to Boxtel with Luc and just relaxed with our cousin Bart and his duck until Suus (Aunt) and Daan (cousin) got home. After dinner Suus, Luc, Bart, Anina, and I went to see Oma (our grandmother). We played cards and had tea. Oma was so happy and excited to see us again. Then we went back to the Molenpad and met Freek (Daan and Bart’s cousin… not on our side of the family) and Daan were playing darts and drinking since Daan finished his final exams that day. We all just sat around playing games and chatting and just enjoying each other’s company. Mom and Amy showed up at around 11:00 and they said they had a fun time in Amsterdam. We stayed out until about midnight until we were all tired then we went to bed.

Marguerite and Amy slept in, so Mom and I went to Oma’s early that morning. We stopped to get her flowers on the way and I laughed at mom using American biking signals on our bike ride. After a cup of coffee and a lekker warm stroopwafel we headed back to the Molenpad (Aunt and Uncle’s house) to make sure Marguerite and Amy were up and awake. At around 1:00 we went back to Oma and Opa’s house for a big family reunion. Anne-Lies (great-aunt) came early to spend some time with us before the great-aunts from my Oma’s side got there. Then Oma’s sisters came. Tante Ann, Marij, and Guus and his wife, Thea were all there. It was nice in the garden with the whole family and to see all the tantes again. Oma was so happy as well. After that we went back to the Molenpad and Daan had another party with all his friends. Denis came and brought paling (smoked eel) which is my Mom’s favorite so we ate that and had a few drinks sitting next to the Dommel. Marguerite, Bart and I played a game of dominoes as all of Daan’s friends had a bonfire in the back yard. After a few rounds, Marguerite joined Daan and his friends and Bart and I went to sleep. 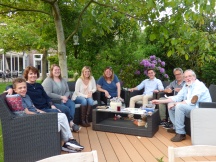