When Italy was mentioned as a potential country to visit, it was my brother who suggested we visit Pompeii. It hadn’t really crossed my mind as a option, but once he brought it to my attention, I was obsessed with the idea. I’ve always been fascinated history and I think it stems back to my love for Magic Tree House books as I was growing up. Visiting Pompeii definitely made me feel like I was going on an adventure with Jack and Annie and their magic tree house.

We got to the city of Pompeii, found our AirBnB for the night, and then started walking around the town a bit. We were almost immediately approached by a tour company, and as the bunch of polite southerners we all are, we stopped and let them give us their spiel. We usually aren’t the type of travelers that explore with a tour group, but it became apparent that the cheapest and easiest way to get to the top of Mount Vesuvius would be to go with them. So we got in their van and they drove us to the top of the volcano. This is where I discovered that I could in fact get car sick and after the 20 painful minutes of being whipped around the tight curves of the Italian roads I was so grateful to be on solid ground for a minute.

Unfortunately, when we got to the top of the mountain, a big cloud rolled in and we completely lost all visibility. I felt a bit disappointed that we had gone through all the trouble to get to the top of Mount Vesuvius and couldn’t actually see anything. But the cloud did lend itself to an other-worldly experience of the top of the volcano and it felt a bit like we were on Mars! And anyway, I don’t know many people who can say that they’ve been to the top of Mount Vesuvius! … an active volcano just waiting to erupt! (after discovering that Mount Vesuvius is in fact an active volcano, I immediately felt more bad ass and just want everyone to know that I live life on the edge. haha) 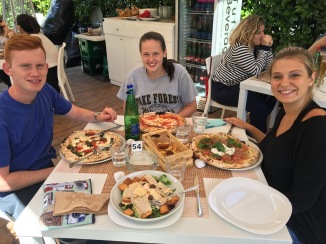 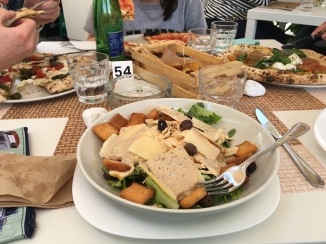 After another tummy-turning ride back to the bottom of Vesuvius, we headed to a recommended restaurant I Matti and had our first real Italian pizza. And let me tell you, you have not had pizza until you have had an authentic Italian pizza. I have never tasted something so delicious and fresh.

The next day, after a relaxing morning, we headed to the entrance of the Pompeii ruins. It was so surreal to see the city and walk the streets that I had read about in history books. It didn’t feel real! When we walked in and just started exploring. There was nothing that was off limits, and we soon found ourselves lost in the ruins of a house on a small road. It was kind of fun that within this very touristic site, you can create your own experience of the place without a large crowd constantly around every turn. We only had a small map of the site with very little detail but we managed to find our way to all the major sites within the ruins. 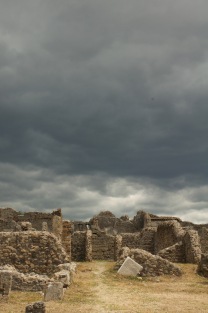 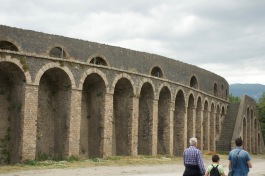 After walking around for several hours, we finally found the casts of the preserved bodies that make Pompeii so famous. It was crazy to think that those people lived in the houses we had been exploring all day and walked on the very same cobblestone streets that we had walked. We finished our self guided tour around Pompeii, and finished by visiting the amphitheater that looked almost perfectly preserved. It is also the oldest surviving Roman amphitheater, older than the Colosseum in Rome by over a century!

After a long day of walking, we were all exhausted and headed back to the AirBnB. We walked to the grocery store and picked up a few snacks, then called it an early night and watched Shrek until we fell asleep. Pompeii was such an experience, and I couldn’t wait for the next few days in Italy and all the pizza and pasta that we were sure to consume.

I made a short video documenting our tour through Italy that you can watch here.